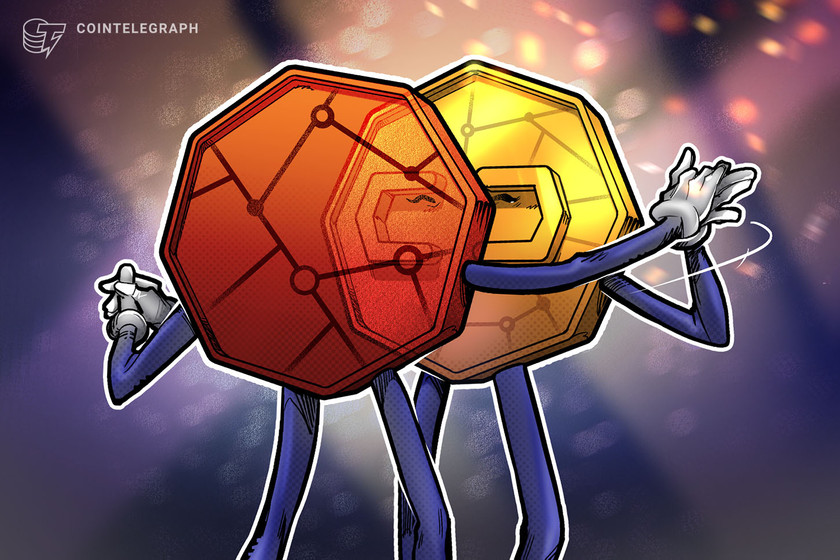 Mastercard is set to open the shop doors to crypto as a means of payment in 2021, but it will likely be a challenge for the firm.

On Feb. 10, Mastercard announced that it would start supporting a select few cryptocurrencies on its payment network. According to the payments giant, the inclusion of cryptocurrencies will allow customers to “save, store and send money in new ways” while opening up new opportunities for merchants as well.

The announcement followed a presentation on Jan. 30 in which Visa reaffirmed its plans to continue to push for cryptocurrency payments and on-ramps, showing that the company has long-term plans for the sector. With both credit card giants on board, it’s safe to say that Bitcoin (BTC) is no longer just an experimental form of “internet money” but rather a new asset class of its own — one that is here to stay.

Mastercard’s and Visa’s foray into crypto is just one example of the ever-growing barrage of mainstream technology and payment companies delving into Bitcoin as an investment, form of payment or investment vehicle, but these two companies represent billions of payments carried out every year.

So, what does this mean for Bitcoin specifically and for crypto in general? Some are saying the industry may not be there yet but that this latest development could be the very beginning of mainstream adoption. Tone Vays, Bitcoin analyst and organizer of the “Unconfiscatable” Bitcoin conference, told Cointelegraph:

“Bitcoin has not yet entered the start of the adoption phase, it is still in the speculation/investment phase. The biggest news surrounding, Elon Musk & Tesla buying Bitcoin as a strategic reserve instead holding cash. Mastercard & Visa being interested in the first step for actual adoption for users but once users actually get comfortable using/spending/receiving Bitcoin via Lightning, they slowly start to phase out Visa & Mastercard from their life.”

The gatekeeper effect: Let the bulls in

When Mastercard’s announcement was made, Bitcoin was trading at about $46,400. Since then, the cryptocurrency has kept on growing to hit a new all-time high above $58,000, with the news arguably playing a factor.

Furthermore, in the week that followed the announcement, the first Bitcoin exchange-traded fund in North America was approved by the Ontario Securities Commission. In its first few hours of trading, it neared $100 million in trading volume.

A second Bitcoin ETF was then approved by Ontario’s regulator, and it’s expected to reach $1 billion in assets under management by the end of February. Additionally, the world’s largest custodian bank, Bank of New York Mellon, revealed it will roll out a cryptocurrency custody service. And next, the world’s largest asset manager, BlackRock, confirmed it has begun to “dabble” in Bitcoin.

Not only that, all eyes are now set on Bitcoin, both among traditional finance titans and retail Reddit investors. Ben Zhou, CEO of Bybit, told Cointelegraph that “Crypto Twitter seems to be the happiest corner of the social platform, with laser eyes and whatnot taking over everyone from exuberant crypto accounts to the world’s richest man to two members of the U.S. Congress,” adding further:

“This concert of positive signals is feeding back to retail demand, and creating a virtuous cycle. And we are seeing the surging interest reflected in Bybit’s fiat-to-crypto onramps and trading volumes.”

Mastercard’s announcement came at a time in which the number of confirmed payments per day on the Bitcoin network has been growing steadily. The number of payments on the network is defined as the number of recipients receiving funds in a transaction.

The metric highlights the value of the Bitcoin network as a secure way to transfer funds without third parties. Over the last 12 months, confirmed payments per day have gone from an average of around 500,000 to a peak of 869,000.

What this means for crypto

So, what do Mastercard’s and Visa’s endeavours mean for the cryptocurrency world? As of the fourth quarter of 2020, there are 246 million Mastercard credit cards in the United States and 966 million worldwide, while Visa reports it has 3.5 billion cards in use throughout the world and that its network processes over 140 billion transactions per year.

Both companies have different plans on how they’ll bring cryptocurrency payments into the world of credit card transactions, and several questions have been left unanswered by their announcements, including how exactly the integration will work.

While Mastercard’s announcement made it clear that crypto is coming to the network this year, it does not specify exactly when, and which currencies will be available. The payments giant hinted in its announcement that stablecoins may be first in line for its network but that other coins may follow.

In a blog post, Mastercard’s executive vice president of digital asset and blockchain products and partnerships, Raj Dhamodharan, hinted the firm will evaluate potential cryptocurrencies to include using its “principles for blockchain partnerships” framework, which it released after leaving the Libra Association. It emphasizes consumer protection, stability and regulatory compliance.

Visa’s and Mastercard’s integration into the crypto world is expected to make it seamless to use cryptocurrencies for everyday payments, which could be considered a step forward in crypto’s quest for mass adoption.

While it isn’t clear if merchants will have to opt-in to accept cryptocurrency payments or if these payments will be accepted by default, cryptocurrencies will essentially be available as a payment method at over 60 million merchants throughout the world. But the road to mainstream adoption still has many bricks to be laid. Arbel Arif, founder and CEO of Shopping.io — a online shopping aggregator offering cryptocurrency payment methods for retail shoppers — told Cointelegraph:

“It will be a long process with a lot of development and quality assurance. Especially with crypto which may seem to miss the mark with being user friendly. As for the initial adoption on a mainstream level, it is a journey and a marathon. Not a sprint. We will likely see more and more companies coming forward in the oncoming months and years announcing adoptions on a small level with crypto before bigger plans are put into motion.”

An increase in demand could further the supply squeeze we’ve been witnessing in cryptocurrency markets and further help prices move up. So far, however, Mastercard is only working with the Bahamian Sand Dollar, the world’s first central bank digital currency.

In an announcement, the payments giant revealed a prepaid Mastercard allowing users to pay for goods and services with the Sand Dollar wherever Mastercard is accepted worldwide. It hinted, however, that cryptocurrencies like Bitcoin will be used in its network in the future.

Crypto debit cards are out there

Both Visa and Mastercard have already been working with several cryptocurrency firms to issue cryptocurrency debit cards that allow users to pay for goods and services with their holdings at millions of merchants worldwide.

Coinbase, BlockFi, Binance, Nexo, Crypto.com and others have issued crypto debit cards, which often include cashback rewards in the form of cryptocurrency. Last year, Coinbase became a full-standing Visa member, even able to issue its own cards. Eric Stone, head of data science at data analytics firm Flipside Crypto, told Cointelegraph that many such announcements will soon follow, adding:

“I view this as part of the broader, inevitable influx of institutional interest and adoption of blockchain technology. I and many other close observers of the space have seen this kind of news as a matter of when, not if.”

Crypto debit cards differ from normal Visa and Mastercard cards because of the exciting perks offered to users, and cryptocurrencies themselves can act as a bridge between fiat currency exchange rates when travelling.

Most crypto debit cards are now already supported by mobile payment solutions such as Apple Pay, Google Pay and Samsung Pay. It’s possible to manage which cryptocurrencies are used to pay through a mobile app, making it easier to choose what to spend.

These existing crypto debit cards, however, often have relatively high fees associated with payments processing and converting crypto assets to the fiat currency merchants receive. On top of that, some crypto debit card providers require users to stake large amounts of their own tokens to unlock the best rewards, but there are some advantages that crypto projects bring to the table. Finally, only citizens of a select group of countries have access to the most popular cards.

How much more mainstream can Bitcoin get?

While there are still a lot of unanswered questions regarding Visa’s and Mastercard’s approaches to processing cryptocurrency payments through their networks, it’s clear that these companies moving into the cryptocurrency space bolsters the legitimacy of the industry.

Ever since PayPal started letting users buy, sell and hold crypto on its platform, Bitcoin and other crypto assets have been further legitimized as their own asset class that is now being accepted by traditional finance firms.

A few years ago, in the minds of an average consumer, cryptocurrencies were mostly associated with darknet markets selling illegal goods and with out of control speculation. Now, BTC is being recognized as a store of value, so much so that publicly traded firms have been investing in it. So, has Bitcoin finally made it? Is mainstream adoption here? On Yavin, managing partner of Cointelligence Fund, told Cointelegraph that crypto is indeed “gaining more momentum than ever before,” adding:

“But we still have a lot of work ahead of us to make cryptocurrency markets mainstream. Despite some regulators and financial institutions still fighting the crypto revolution, many have started to understand the value of both blockchain technology and crypto-assets. The future is bright and it is up to our industry to continue to educate and innovate to overcome the regulatory hurdles ahead.”

MicroStrategy has invested $1.145 billion to buy 71,079 BTC, now worth around $3.8 billion at the time of writing. Tesla announced a $1.5 billion investment, with the electric car maker believed to have bought 48,000 BTC at an average price of $31,250 a pop. At today’s prices, the company would now hold around $2.5 billion. MassMutual, Square, Ruffer Investment and others have also invested in the cryptocurrency, helping its market capitalization surpass $1 trillion.

While Bitcoin now appears to be as popular as it has ever been, data shows otherwise. According to data from Google Trends, search interest for “Bitcoin” is still below the levels seen back in 2017, despite the significant price increase and growing corporate adoption.

What this likely means is that large investors and corporations are driving up the market, while retail investors are largely staying on the sidelines. However, when it comes to general public outlook, the acceptance by these giants may change the way retail shoppers look at cryptocurrencies. According to Arif, large companies acting as “a bridge that connects the common shopper to cryptocurrencies like this is pivotal for the entire industry as crypto is being taken seriously worldwide as a form of payment.”