Interview: Trading Our Time To Earn Bitcoin With Math Cannot Be Banned 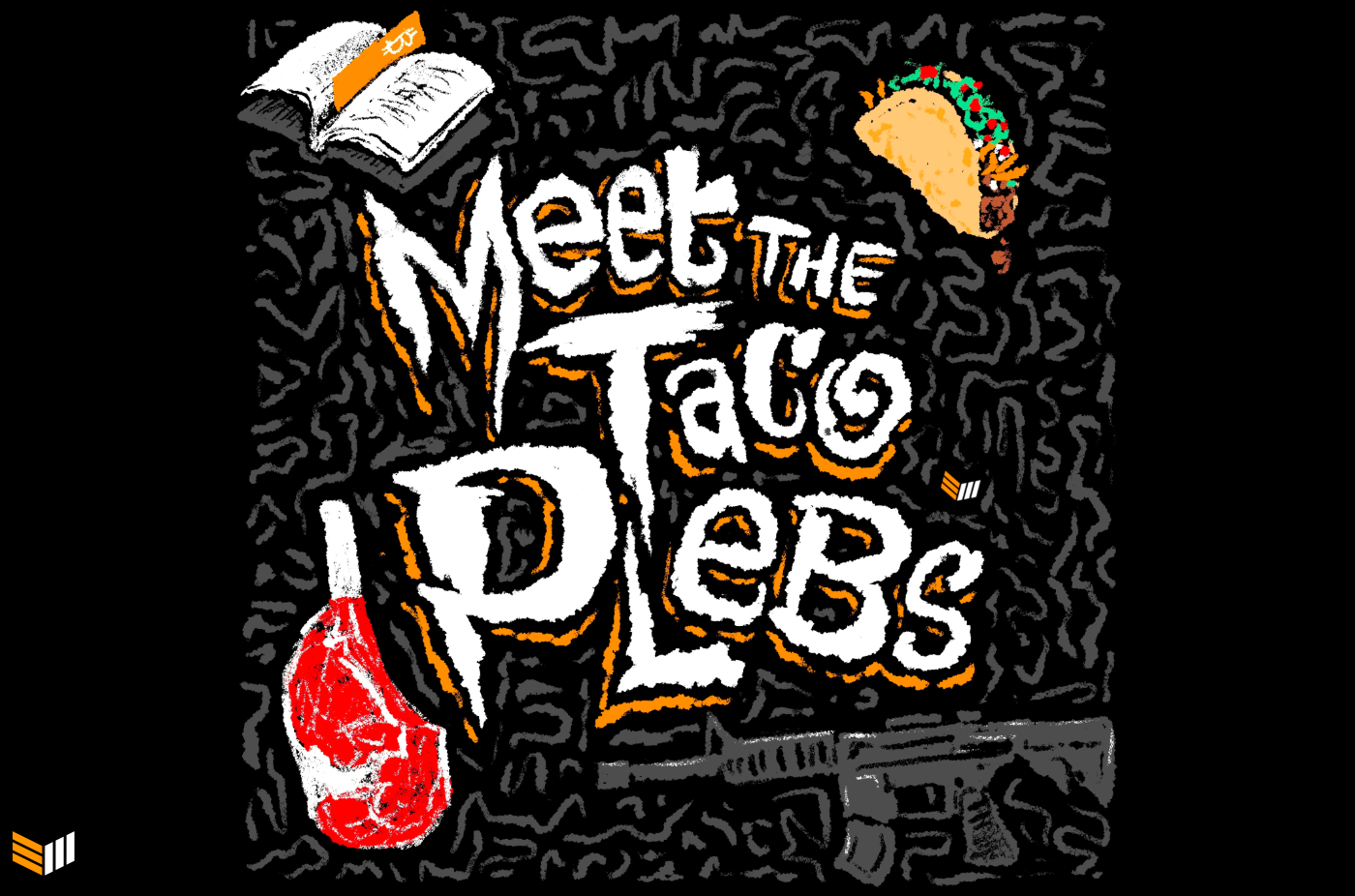 Listen To This Episode

For this episode of Bitcoin Magazine’s “Meet The Taco Plebs,” I was joined by fellow pleb Math Cannot Be Banned (@beeforbacon1) for his first-ever podcast appearance.

We started off this conversation with the guest sharing his rabbit hole story and how he found Bitcoin. He explained that being a libertarian before finding Bitcoin helped him grasp the importance of having sovereign money and why Bitcoin is important. He discussed his very brief shitcoin phase, which he is grateful didn’t last long.

One thing he touched in this podcast that I want to emphasize is that time is finite, and what you trade your time for is crucial. Working a normal job every day earning fiat currency is not necessarily a recipe for success, as you are forced to risk your earned fiat in investments to escape monetary inflation. Bitcoin fixes this, as you can save your monetary energy into the future with no risk, as bitcoin has a capped supply, and no one can inflate your savings away.

We also talked about meeting at the BitBlockBoom! conference last August in Dallas, Texas. Math Cannot Be Banned touched on the Bitcoin community there and how it tends to care about the same important topics, including living a low time preference lifestyle and studying philosophy. Which really brings us all together and unites us, as most people don’t seem to care about many of the things us Bitcoiners do today.

Below are some of Math Cannot Be Banned’s most interesting thoughts shared during the interview. And be sure to check out the full episode for more.

How Did You Find Bitcoin And Fall Down The Rabbit Hole?

I think that most present-day Bitcoiners have a libertarian sort of bent to them. Not all, but most. And I think in my experience, most of them discovered Bitcoin before discovering Austrian Economics, voluntaryism, etc. I was one of those rare people that was a devout libertarian (lower case “l”) before I really dove into Bitcoin.

I lived in Denver after college and there was a ancap-type meetup there called “Liberty On The Rocks” a couple times a month. Shout out to that crew, great times and it’s still going strong. I don’t live in Denver anymore, but I miss a lot of those awesome libertarians. Anyway, there was someone there in 2013 who gave a little talk about Bitcoin and I found it really interesting but I quickly realized that I personally had no use case for it, and the narrative back then was as a payments system rather than a scarce store of value, so I decided it wasn’t for me. Fast forward to 2014 or 2015, I saw Bitcoin on the news in passing. One of the classic “bitcoin crashes to $250!” kinds of thing and I thought, “Jeez, that’s unfortunate,” but didn’t pay any mind.

Then in 2017, I saw that bitcoin was above $1,000 and decided that since I finally had some disposable income, I would finally get into it. Jumped right into Coinbase and off I went. I deleted Coinbase shortly after, but that was my initial gateway. Anyway, I started stacking. I started asking questions on the /r/bitcoin subreddit. The fork wars were just starting but it seemed like noise to me, so I mostly ignored it as I didn’t really understand it at the time. I kept learning, got a Trezor, etc. I only got sucked into the shitcoin trade for a few weeks before I decided it was dumb, and just decided to do bitcoin. I rode the wave all the way up and all the way down from 2017 to 2018, kept stacking and haven’t looked back.

How Has Bitcoin Changed Your Life?

I already had a libertarian outlook and personal philosophy, so Bitcoin didn’t change much in that respect. What it did change was actually my desire to work, which seems weird at first. When I say work, I don’t mean my day job, which I still have, but I mean work at improving my skills that I believe have real value. Studying, learning, understanding… in my free time.

Don’t get me wrong, I have some useless hobbies as well (I am a sucker for video games as a relaxation method), but during the bear market of 2018, I wasn’t crying about the price. I was learning Linux, I was learning about how nodes worked, and at the end of 2018, I was experimenting with raspberry pis and installing LND way in the early days. No particular reason other than to sort of satiate this newfound drive I discovered to learn everything I could. I am not a computer scientist or a programmer, but I quickly learned how to use GitHub, compile, install and use Linux command line. The joys of Linux are very profound and I really do urge anyone who is on the fence to just hop in. Yes, you will break stuff, yes, it will be frustrating, but it’s so worth it.

What Do You Consider To Be The Most Amazing Thing About Bitcoin?

The most amazing thing about Bitcoin is by far the people involved. The plebs, the devs, the community. I think it’s incredible. I met you at BitBlockBoom! last year along with countless others. We all have the same gleam of hope and drive in our eyes. We are here to make the world better in any way we can.

This isn’t about dirty fiat value. This is about valuing our time in a finite way because our time is finite. Fiat is infinite, so it is a poor storage of time. Besides that, the stuff that is being built right now is just incredible. Taproot, all the Lightning Network stuff. I am shoulder deep in Lightning and participate and interact with Lightning Labs devs frequently and I am so excited for the potential of this technology. The common man and woman out there have no idea what we are all trying to build and it’s going to be great. I wonder if this is what folks in the early 1980s were feeling when they were working on what is now the internet. It’s like you can see something that no one else sees.

How Would You Advise Someone To Learn About Bitcoin? What Are Your Favorite Podcasts, Articles And Books?

That’s tough. I think Bitcoin solves many issues, but if someone actually came to me completely off the street and asked what to read, I would point them to Saifedean’s “Bitcoin Standard.” It’s important to understand monetary history to understand Bitcoin and that book really lays it out.

Anything by Parker Lewis or Robert Breedlove is god tier (“Masters And Slaves Of Money” is great), and Nic Carter is doing great work as well on the writing front.

Podcasts…haha, man there’s always some new podcast. I think I have like 20-something on my feed. I have been enjoying Aleks Svetski’s “Wake Up” podcast a ton though. He is like my twin in the way we think, he’s just a great ancap- and freedom-oriented Bitcoiner that I recommend to everyone regardless if they are into Bitcoin or not.

What Is Your Best Bitcoin Pitch?

At my normal job, I was working recently and some colleagues were talking about trading forex or something dumb the other day. One of them called me out and said, “Hey, you do trading, right?” I turned around and said, “Oh no. I just buy bitcoin and then do nothing and it’s value goes up. It’s pretty easy.” I will never forget the blank stares. I don’t advertise myself as a Bitcoiner but I just felt the urge to say that on that particular evening. It’s hard to pitch Bitcoin. For me, I plant little seeds, and then I just hope they come to me and ask questions. This has worked for me a little bit. Recently, a buddy linked me that ridiculous Bloomberg double-spend article and I had to explain what a double spend actually was, which kept his hands strong and he didn’t sell. He’s still relatively new but coming around. I think it’s really hard to just straight-up red (or orange, in this case) pill someone. Neo had to actually choose to take the pill. I don’t think Morpheus would have forced it down his throat.

The post Interview: Trading Our Time To Earn Bitcoin With Math Cannot Be Banned appeared first on Bitcoin Magazine.