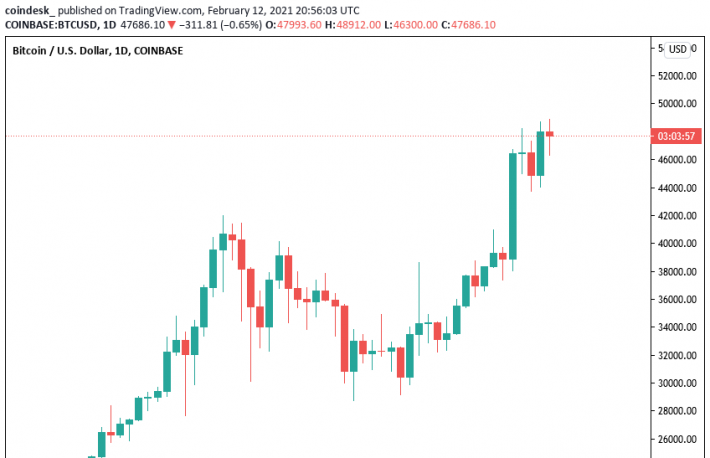 Much of bitcoin’s choppy price action could be attributed to futures deleveraging as eager bulls piled into long trades expecting a swift breakout to $50,000 or higher. Funding rates for perpetual bitcoin futures have steadily increased through February, according to market data collected by Skew, with some funding rates reaching their highest levels in the past 12 months.

In the past 24 hours, over $330 million worth of bitcoin futures contracts were liquidated, according to market data from Bybt. Most of the liquidated positions were longs.

Despite the choppy price action, news over the past few days has been extraordinarily bullish for the leading cryptocurrency. In one week, Tesla bought $1.5 billion worth of bitcoin, Twitter’s CFO said the company is considering investing in the cryptocurrency, BNY Mellon announced plans to custody bitcoin for its clients, and PayPal confirmed its plans to add crypto to its Venmo product.

As it set new record highs above $1,850, other decentralized finance-related (DeFi) cryptocurrencies followed suit, with some even outperforming ether. The DeFi sector in aggregate rallied over 5% in the past 24 hours, according to Messari, led by Uniswap, yearn.finance and others, which gained by double-digit percentages.

Ether’s fresh highs come the same week the CME launched its ether futures market, which some traders anticipated would be a bearish catalyst for the market. The expectations were almost exclusively pinned to the ominous timing of bitcoin’s peak in 2017 near the launch of CME’s bitcoin futures market. Yet, so far the bearish thesis has not played out.

Since CME’s futures launch, ether has rallied over 12%. The product has had a quiet start, with less than $200 million worth of contracts traded this week. In contrast, Binance’s ether futures have traded nearly $40 billion worth this week.