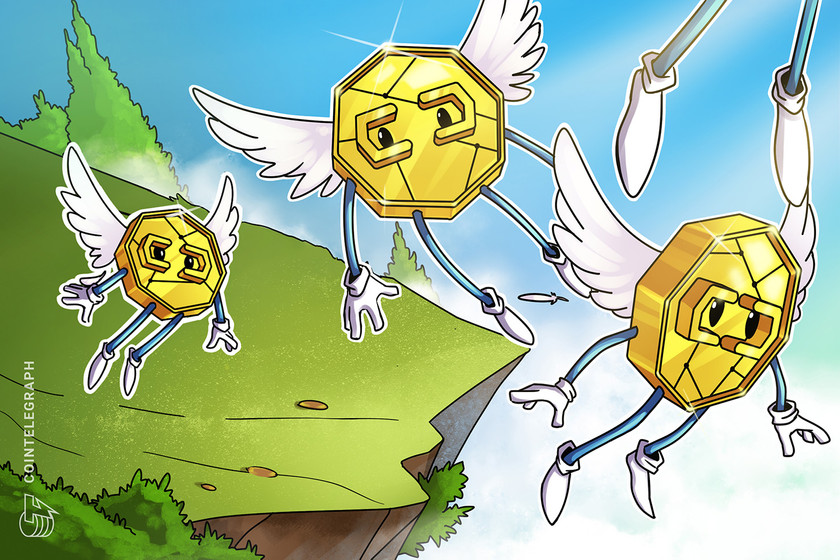 Strong future growth prospects and new institutional investments appear to be backing the rally in WAVES, INJ and CELO.

Bitcoin (BTC) extended its relief rally on Tuesday and reclaimed a market capitalization above $1 trillion.

While many traders panicked during Bitcoin’s recent fall below $47,000, fund manager Dan Tapiero said that he spotted a rare TD sequential buy signal during the low. The last time this signal was seen was in March 2020 when Bitcoin price traded near $3,600. Tapiero believes Bitcoin remains on target to reach $100,000 this year.

However, even after the recent rise above $55,000, Bitcoin’s market dominance continues to lag at 49.5%, according to CoinMarketCap data. This shows that crypto investors are focusing on altcoins, with several hitting new all-time highs.

The altcoin season is not entirely driven by retail investors. A recent report by crypto investment advisory firm Two Prime Digital Assets highlights that the eightyfold growth in Ether (ETH) options open interest, from $50 million to $4 billion in a year, points toward hedging by institutional money managers to protect their “net long portfolios against outsized volatility events.” Even the Ether futures market has increased by 20, cementing the involvement of institutional investors.

Keeping the focus on altcoins, let’s study the fundamentals and technicals of three tokens that have done well in the past few days.

Many crypto enthusiasts are interested in investing in digital assets, but they do not have the required trading experience. Therefore, they miss several opportunities or end up leaving money on the table. Others work full time and, therefore, cannot devote time to trading. For such investors, a well-devised algorithmic trading product could be suitable, but it comes with its own risk.

Waves launched a new algorithmic trading investment product called “Lambo Investments” on April 15. The protocol’s exchange platform announced it would give away a Lamborghini Huracan to a random investor in the product, which could have lured traders.

Along with decentralized finance (DeFi) and algorithmic trading, Waves has also made a splash in the nonfungible tokens (NFTs) sector. While the overall NFT craze has subsided, select investors continue to focus on them. The first Waves Duck NFT, called “Perfection,” was sold for 1 million Neutrino USD (USDN) — an algorithmic stablecoin pegged to the U.S. dollar and collateralized by the native Waves token, WAVES — on Sign Art on April 12.

To further boost growth, Waves founder and CEO Sasha Ivanov recently laid out ambitious plans to reach $10 billion in total value locked by October and average 10 million daily transactions by February 2022. Traders are likely to keep a close watch on the developments, which could decide the level of investors’ interest in the project.

The WAVES/USDT pair could give back some of its gains and drop to the $16–$17 zone. If the bulls can flip this zone into support, it will suggest that sentiment remains positive and traders are accumulating on dips.

The 20-day exponential moving average (EMA) of $14.64 has started to rise, and the relative strength index (RSI) is in the positive zone, indicating the path of least resistance is to the upside.

A strong bounce off the support zone could result in a retest of $21.09. If buyers can drive the price above this resistance, the pair could resume its uptrend and reach $25.

This bullish view will be invalidated if the bears sink the price below the 20-day EMA. Such a move could pull the price down to the 50-day simple moving average (SMA) of $12.65.

Injective Protocol recently announced that it secured $10 million in funding from several investors, including Pantera Capital and billionaire Mark Cuban, for its DeFi protocol, which is alleged to have the best of both centralized and decentralized exchanges. Injective’s aim is to build a decentralized competitor to Robinhood.

On the development front, the protocol announced on April 15 that it had achieved “Trezor support for the EIP-712 signature standard,” which will allow Trezor users to access Ethereum-based applications.

Injective has been partnering with several blockchains to improve the experience for its users. Thus far in April, it has announced collaborations with API3, Harmony, Staked, Litentry, Persistence, Big Data Protocol and Klaytn.

Additionally, periodic token drops in Equinox Staking may have been an added attraction to the investors.

Injective’s native token, INJ, rose from $10.91 on April 20 to an all-time high at $21.55 on April 22, recording a 97% increase in three days. The bulls could not sustain even higher levels on April 20, as seen from the long wick on the candlestick.

This encouraged the bears, who tried to trap the bulls and start a correction. However, the buyers purchased the dip to the 50-day SMA ($13.40) on April 23 and defended the 20-day EMA ($15.26) on April 23. This suggests that the sentiment remains positive and the bulls are accumulating on dips.

Contrary to this assumption, if the bears pull the price below $18.15, a drop to the 20-day EMA is likely. A break below this support would signal that the momentum has weakened, and the pair may drop to the 50-day SMA.

Celo announced on April 20 that Deutsche Telekom made a “significant purchase” of CELO tokens through its strategic investment fund, Telekom Innovation Pool. Although the size of the investment was not disclosed, it is likely to be a major sentiment booster for the token.

A new gas-efficient bridging standard dubbed “Optics,” connecting Celo to Ethereum, was announced on April 21. This is the first step toward building an open, connected blockchain ecosystem, which eventually will include Cosmos, Polkadot and others.

The payments platform announced the launch of the stablecoin Celo Euro (cEUR) on the mainnet on April 22. This is the second stablecoin, after Celo Dollar (cUSD) — which was launched on Celo in June 2020. This increases the user base for Celo users who want to send or receive money from relatives and friends.

CELO has been consolidating between $3.50 and $5.76 for the past few days. The bears pushed the price below the support of the range on March 25, but the bulls reclaimed the level on March 26, indicating buying at lower levels.

The sharp rally on April 20 and 21 propelled the price above the overhead resistance of the range, but the bulls have not been able to consolidate their advantage. The bears pulled the price back into the range on April 22.

Conversely, if the bears sink the price below the 20-day EMA, it will suggest that the pair could remain range-bound for a few more days.

The views and opinions expressed here are solely those of the author and do not necessarily reflect the views of Cointelegraph. Every investment and trading move involves risk, and you should conduct your own research when making a decision.